Looking back on history we have the perspective of knowing how the Space Race all turned out. We know that the U.S. won the race to the Moon, and we did it within Kennedy’s deadline. But at the time of the first spacewalk, things didn’t look so bright for the American Space Program. NASA was way behind, and it appeared by every measure that it would stay that way.

At that moment in time I don’t think that the U.S. Space Program had even a single space “first.” In fact, it looked at that time like the Soviets were pulling away from the U.S. at an accelerated pace, leaving us in the dust.

I got to meet Alexei Leonov (and got some of the items shown autographed in-person!). I asked him about that first spacewalk, and he explained that the Soviet spacewalk strategy involved an inflatable “double-door” airlock, so that the Cosmonaut that remained inside the spacecraft didn’t have to decompress (which the U.S. Astronauts had to do during the Gemini program, where both of the crew were exposed to the vacuum of space during their EVA). You can see the inflatable “tunnel” on the stamp artwork that Leonov created for that commemorative.

Leonov’s spacewalk started out uneventfully. Leonov got out of the tunnel OK, and performed the first Extra Vehicular Activity (EVA, “Spacewalk”). He walked in space for 12 minutes, attached to a 16 foot tether. But things got tense when he went to go back into the spacecraft – his pressurized suit had expanded so much he couldn’t fit into the airlock. Knowing that his life was at stake he took the risk of partially depressurizing his spacesuit, and with his suit deflated he was just able to make it back into the capsule. As Leonov was signing that commemorative cover for me, he said in his very-thickly accented English, “I nearly died!” 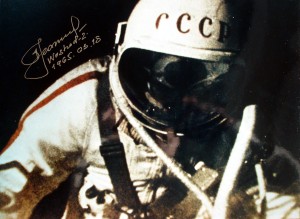 So how did the U.S. respond to being in second place? Did we give up? Was it too much to compete with such a strong opponent who was so far ahead?

No. We had set our sights on a goal – the Moon. We made a decision as a nation that we would make it by the end of the decade. And when we set our minds to it, there is nothing we couldn’t do. Within a year of Leonov’s spacewalk the U.S. had become the first to dock in space, and from there we never looked back.

As I write this it’s March 2012. We just celebrated the 50th anniversary of John Glenn’s historic Mercury-Atlas 6 flight (our first manned orbital mission), and just last year we retired the Space Shuttles – our only method of putting people in space. At this point we have to pay for rides to space – from the very Russians that we beat to the Moon. If you’ve read this far, please leave a comment and let me know if you think that we can regain that same spirit that overcame the impressive Soviet firsts, that allowed us to progress past the daunting Soviet accomplishments with new firsts of our own, and finally drove us to land the first humans on the Moon. Have we forgotten, and can we ever get that spirit back?