I’ve collected several envelopes that commemorate the splash-down of the historic Gemini 8 mission. Collectors of space memorabilia call them “Recovery Covers” because they were canceled on-board a Navy ship that was part of the force sent out to recover the crew after splash-down. There were dozens of Navy ships involved in the recovery effort, spread out in case the capsule came down in an unexpected area. Recovery covers come in two flavors: Prime Recover Covers are those envelopes canceled on-board the actual ship that picked up the crew, and Secondary Recovery covers are similar, but they were canceled on ships that were part of the overall Naval recovery force but not “prime” – they did not actually pick up the crew. Typically, a single ship was expected to become the prime recovery vessel, but it did not always work out that way.

Gemini 8 was supposed to splash down in the Atlantic and get picked up by the carrier USS Boxer. But the Gemini 8 Prime Recovery covers were canceled aboard the destroyer USS Leonard F. Mason, which was the closest vessel to the actual splashdown – east of Okinawa. Even being the closest vessel, the USS Leonard F Mason had to travel over three hours to pick up the crew. Yes, Gemini 8 splashed down in the wrong ocean. What happened? My recovery cover helps to tell the story. 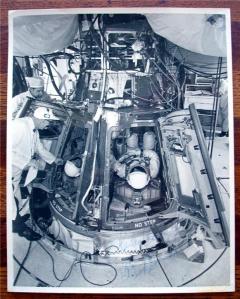 Neil Armstrong and Dave Scott (who both later walked on the moon) had just become the first astronauts to successfully dock in space. Soon after the docking with the Agena target vehicle, their capsule and the Agena started spinning in space, end over end. Thinking that perhaps the trouble was a stuck thruster on the Agena, the astronauts decided to undock – but they soon discovered the problem was a stuck thruster on their Gemini capsule. Their capsule began spinning faster and faster – nearly one revolution per second. They were finally able to bring the capsule back under control by using the capsule’s reentry control thrusters, which by mission rules meant that Armstrong and Scott had to make an immediate return to Earth a mere ten hours after launch. Unexpectedly, and in the wrong ocean.

When I look at those Gemini 8 recover covers, I think about how dangerous that situation was and admire how they were able to think past their circumstances to come up with a solution and save their own lives. I can only imagine what the hours were like as they were stranded alone in high seas waiting to be picked up – seasick and throwing up. But they made it, and later they both walked on the moon.

The recovery covers were on-board the prime recovery vessel USS Leonard F. Mason when its crew found out that they would be the ship to recover the Gemini 8 crew. The covers were there when the astronauts were picked up from those high seas and brought home safely after a hair-raising mission that barely spared their lives. And they help to tell the story of the first docking in space – and the first splashdown in the wrong ocean.  <Excerpt taken from Abandon in Place – the Seven Forgotten Leadership Lessons of the Space Race). 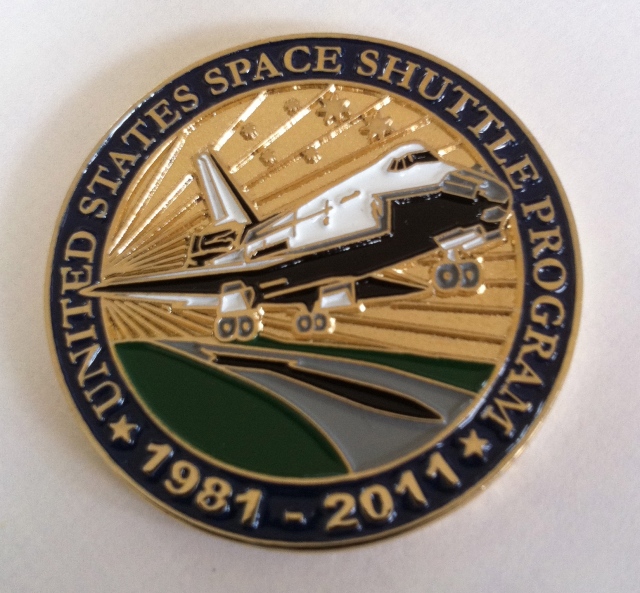 The website (www.SpaceShuttleCoin.com) has photos and a video describing the significance of the coin’s artwork and the flown-in-space contents of this historic commemorative.

Space Race Quiz ANSWER- Which Astronaut Spent the Most Time in Lunar Orbit?

All of the potential answers were U.S. Astronauts, but only one has the world record time in Lunar Orbit. Let’s take a look at the possible responses:

Jim Lovell – Lovell was the only person to ever fly to the moon twice but never walk on it. On Apollo 8 he orbited the moon 10 times (about 20 hours total) with fellow crew members Bill Anders and Frank Borman. He also flew to the moon on the ill-fated Apollo 13 mission, which technically never orbited the moon, but swung around it and returned immediately to Earth.

John Glenn – Glenn flew in the Mercury program (Mercury-Atlas 6, “Friendship 7” launched Feb 20 1962) and was the first U.S. Astronaut to orbit the Earth. Glenn also flew a Space Shuttle mission (STS-95 Discovery, launched Oct 29 1998). But contrary to what some believe, he never flew to the moon. 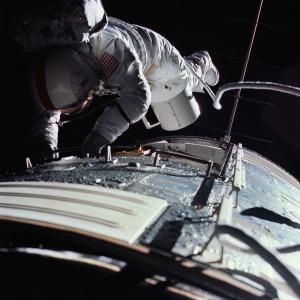 Ron Evans – The Apollo 17 Command Module Pilot is the winner and holds the record of more time spent in lunar orbit than anyone else – 148 hours. He was also the last person to ever perform a deep-space EVA.

Neil Armstrong – The Apollo 11 astronaut was the first man to walk on the moon, but that crew didn’t spend much time in Lunar orbit – only 30 orbits lasting less than 60 hours.

Space Race Quiz – Which Astronaut Spent the Most Time in Lunar Orbit?

Our Space-Race Quiz today involves astronauts in lunar orbit. As you probably know, only 24 people ever have flown to the moon – all U.S. Astronauts during the Apollo program.

Which Astronaut Spent the Most Time in Lunar Orbit? Come back to see the answer.

As crazy as that headline looks, we may be reading something like it soon after the Shuttle Program ends. The facilities may not be for sale, but just this week I saw that NASA’s Kennedy Space Center facilities may become available for space-related commercial use following the end of the Space Shuttle Program. 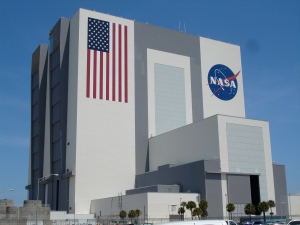 “Kennedy [Space Center] has been working for some time to enable commercial space activities at the center that are in line with NASA’s mission,” Kennedy Center Director Bob Cabana said. “Partnering with the commercial space industry will help NASA meet its goals and help sustain facility assets to support our nation’s space objectives.”

Listen to the list of facilities that may be available: : Launch Pads 39A and 39B, the Vehicle Assembly Building, Orbiter Processing Facilities and the Shuttle Landing Facility.

We won the Space Race using those facilities. It seems almost impossible to imagine that such facilities could ever come to be in the hands of anyone other than NASA.

Please leave comments and let me know what you think.

The plan was to land a man on the moon and return him safely to the Earth before the sixties ended – and we were well on our way. The Mercury Program had successfully placed American astronauts into orbit. The Gemini program had given us skills in long-duration flights, rendezvous and docking, and extra-vehicular activity (EVA, spacewalk). In 1967, the time had come to take the final steps towards that final goal – a voyage to the moon.

Dave at Launch Complex 34 - site of the Apollo 1 Fire

On January 27, 1967 – just 35 months away from the “end of the decade” goal – things were moving fast and furious. On that Friday afternoon a Saturn 1B rocket with the Apollo 1 crew on top was standing on-pad at Cape Canaveral’s Launch Complex 34. Astronauts Grissom, White and Chaffee were going through a realistic simulated countdown called the “Plugs-Out Test.” At about 6:30 PM, a fire broke out in the Command Module that killed the crew and put the U.S. space program on-hold.

I’ve written a lot about that event. The header photo of this blog is Launch Complex 34 at sunrise. In my opinion, this is the site of the greatest leadership lesson from the space race.

I’ve recorded a two-part video (15 minutes each part) that primarily addresses how we will remember the Space Shuttle program as it winds-down to the program’s final flight, and also addresses the subject of why we collect space memorabilia. Although the videos are mainly aimed at promoting the Space Shuttle Program Commemorative Coin*, the last part of the second video specifically addresses the greatest leadership lesson that was learned during the Space Race – a lesson learned from the Apollo 1 fire.

*The Space Shuttle Program Commemorative Coin, which my company is developing, is the focus of the first video. Please leave a comment and let me know how you like them.

Today NASA announced the Space Shuttle Atlantis is being “baselined” for a final shuttle mission to the International Space Station (tentatively scheduled for launch from Pad 39A on June 28 2011). 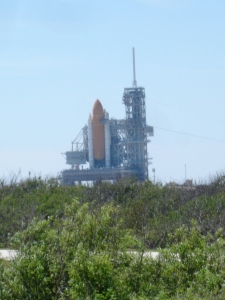 Shuttle Atlantis at Pad 39A

As readers of this blog already know (from a previous post on the last external shuttle tank), the production line for Shuttle external tanks is already shut-down, and only three tanks remain. STS-133 is having its External Tank repaired for launch on Feb 24 after finding cracks in the tank. The next launch (which until today was the last scheduled launch of the Space Shuttle Program) is STS-134. Each of those launches was to have the third “spare” External Tank ready for a rescue mission, if needed. Now it looks like June 28 will see Atlantis fly with that final External Tank – and none left to fly a rescue mission. The thinking is that since the mission would be to the International Space Station, any emergency would be mitigated by having the astronauts stay at the ISS until Soyuz capsules could be sent to bring them back to Earth.

NASA announced today that it is targeting 4:50 p.m. EST on Thursday, Feb. 24, for the launch of space shuttle Discovery’s STS-133 mission to the International Space Station. The liftoff of shuttle Endeavour’s STS-134 flight is planned for 7:48 p.m. EDT on April 19, from NASA’s Kennedy Space Center in Florida. 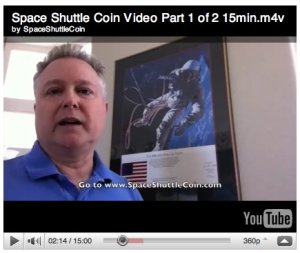 The stats helper monkeys at WordPress.com mulled over how this blog did in 2010, and here’s a high level summary of its overall blog health:

The Blog-Health-o-Meter™ reads This blog is doing awesome!. 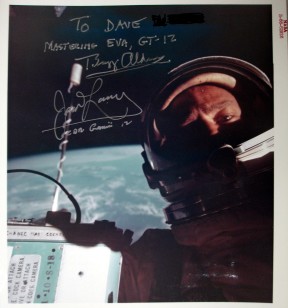 The busiest day of the year was September 11th with 65 views. The most popular post that day was NASA Quiz 004 ANSWER- Who was the first to walk in space?.

Where did they come from?

These are the posts and pages that got the most views in 2010.